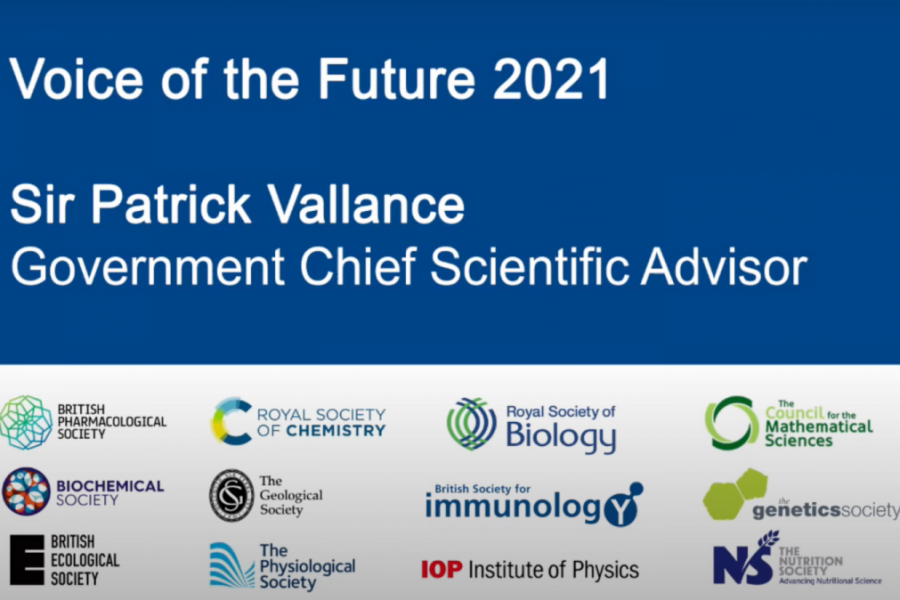 Reversing the format of a Parliamentary Select Committee, Voice of the Future is unique event that allows a panel of early career scientists the opportunity to question Senior parliamentarians and government figures on issues relating to Science Policy.

The event, organised by the Royal Society of Biology, on behalf of the Parliamentary Science and Technology Committee, usually takes place in Westminster; however, this year the event was held via zoom on Wednesday 10 March as a result of COVID-10 restrictions. The students asking questions were all representatives from UK Learned Societies across STEM (Science, Technology, Engineering and Mathematics) disciplines.

Dr Mark Downs, Chief Executive for the RSB welcomed the Committee and opened proceedings with a short speech before Amanda Solloway MP, Minister Science, Research and Innovation was questioned on the Government’s plans to protect the gains in gender equality within STEM, and how the government will support universities to combat the unhealthy work-life balance within research. Solloway discussed the development of the new R&D “people and culture” strategy and stressed the importance of having an open and inclusive research and development culture to ensure scientists, researchers and innovators feel secure in the longevity of their careers.

Chi Onwurah MP, Shadow Minister for Science Research and Digital followed, and was questioned on the Governments plans and funds in place to promote and ensure equality, diversity, and inclusion within science. As one of several MPs featured in a public health message encouraging COVID-19 vaccine uptake in BAME communities, Onwurah commented on how important it is to address the sources of misinformation found on social media platforms and talk about research development, particularly around the vaccine in an open and transparent way. 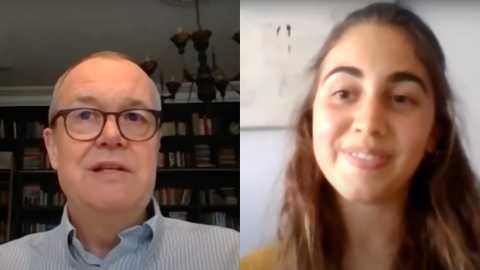 The afternoon session was led by the Government’s Chief Scientific Advisor, Sir Patrick Vallance, who began by discussing the lessons he would like to take away from the pandemic, such as how to work collaboratively to develop medicines more quickly. Sir Vallance highlighted the cooperative approach to the COVID-19 vaccine - it was remarkable to see the paralleled work between academics, small companies, large companies, regulators, and manufacturers for a common goal. Sir Vallance went onto discuss the importance of critical thinking, and recognising that science rarely has a definitive answer, and that is the beauty of it.

The Nutrition Society was represented by Almudena Goas, University of Surrey who asked her question to Sir Vallance – ‘What new approaches can be and are being taken to address the prevention and amelioration of health from an early age?’

Sir Vallance highlighted that as many disease patterns are programmed early in life from exposure to certain diets and environments, it is not a simple area to tackle at any point, and whilst it is important to think about diet, exercise, and lifestyle at all life stages, it is particularly important in early life. The past year highlighted Obesity as a major risk factor for poorer COVID-19 outcomes and this has almost certainly been a factor in some of the poor outcomes seen in the UK. Whilst the recent government report on Obesity has stressed that tackling these issues is challenging and requires a whole systems approach, there are many groups within the Department of Health and Social Care that are continuously looking at ways to improve the nutrition and health of the population.

The final session involved questions being posed to members of the House of Commons Science and Technology Select Committee, including its chair Rt Hon Greg Clark MP. Never has there been a year before 2020, that scientists have had such as high profile and the committee highlighted the need for more scientists to get politically involved. The committee went on to discuss the role of hydrogen in achieving Net Zero and how to combat plastic pollution before ending the event on a lighter note. Each MP shared a scientific discovery they’d like to see in their lifetime, and answers ranged from human teleportation to curing world hunger.

The event is available on the RSBs youtube channel.