STEM for Britain 2020 | The Nutrition Society Skip to main content 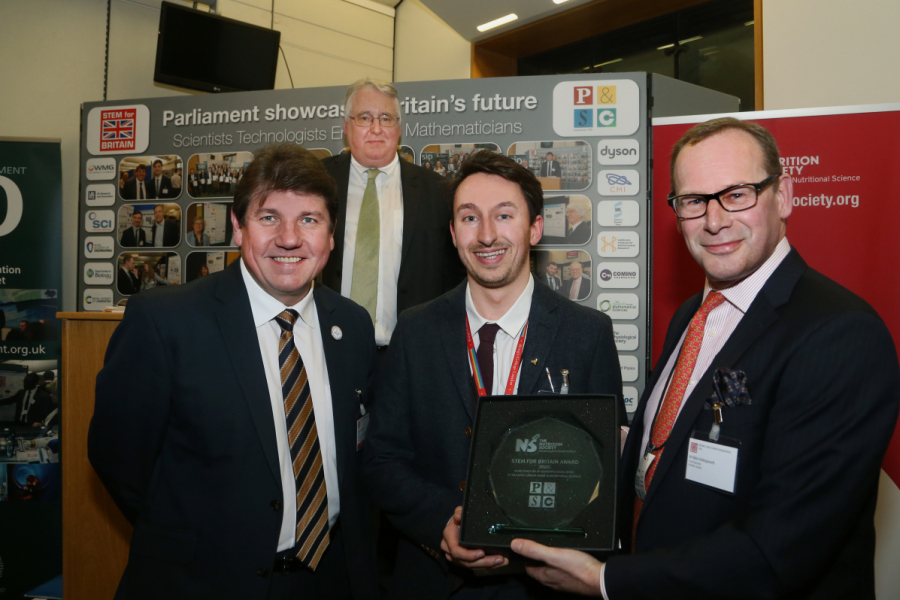 STEM for BRITAIN (formerly SET for BRITAIN but now renamed to reflect the importance of its mathematical element) was established by Dr Eric Wharton in 1997.  Following his untimely death in 2007, the Parliamentary and Scientific Committee, with support from the Royal Academy of Engineering, the Royal Society of Chemistry, the Institute of Physics, the Royal Society of Biology, The Physiological Society, The Nutrition Society and the Council for Mathematical Sciences, is working together with the Parliamentary and Scientific Committee to continue this poster competition in the House of Commons and help progress the UK research and development.

The competition attracts over 500 entrants, of whom approximately one third are selected to present their work in Parliament. The prestigious annual event is attended by a significant number of Members of Parliament and Peers and is open to early stage or early career researchers, which includes university research students, postgraduates, research assistants, postdocs, research fellows, newly-appointed lecturers, part-time and mature students, returners, those people embarking on a second career, and their equivalent in national, public sector and industrial laboratories, and appropriate final year undergraduate and MSc students, all of whom are engaged in scientific, engineering, technological or medical research. Each year  approximately 210 early stage or early career researcher posters are judged by professional and academic experts.  All presenters are entered into either the engineering, the biological and biomedical sciences, the physical sciences (chemistry), the physical sciences (physics) session, or the mathematics session, depending on the researcher’s specialism.

This year the biological sciences poster presentations, which werepresented during the second part of the event were greatly innovative and showcased a wide range of topics from using artificial intelligence to predict cell cycle changes of melanoma cells to 3D printing teeth for research and teaching. The number of nutrition related posters had increased from previous years and included Aygul Dagbasi's research into understanding the role of food structure in appetite control at Imperial College London, Laura Dearden's work into the impact of obesity during pregnancy on offspring food intake and obesity risk from the University of Cambridge, Mathilde Gressier's research in population behaviour in public health policies using the example of the sodium reformulation from imperial College London and Greg Lesson from the London Fire Brigade who had pioneered a fire station based nutrition Intervention programme encompassing innovative dietary and body composition assessment tools for cutting the risk of heart attacks and heart disease in fire fighters.

This years BRONZE award was given to Ted Roberts, School of Biochemistry, Biomedical Sciences, University of Bristol for his work culturing neutrophils from stem cells to explore neutrophil cell biology and diseases.

Karoliina Tuomela, Lydia Becker Institute of Immunology, University of Manchester took home the SILVER Award for her research into Radiotherapy making cancer cells resistant to immune cell attack. The GOLD Award was given to Sarah Houston, Institute of Ophthalmology, University College London for her research 'Using the eye as a window to the brain in multiple sclerosis'.

This was the second year the Nutrition Society had the pleasure of awarding its own prize. This the Nutrition Society’s CEO, Mark Hollingsworth presented the award to George Firth from Kings College London for his biomedical engineering and imaging sciences research into "Pet Metallomics using Radioactivity to track essential trace metals in the body".

In his address to the event Mark Hollingsworth, CEO of the Society said “Today we have seen the future of science in this country, and that future is very bright. I am very fortunate to occasionally travel around the world helping to promote UK nutritional science and the Society’s internationally renowned peer reviewed scientific journals in which the science is published. I am humbled during these visits by the high degree of respect in which UK science and its scientists and researchers are held. We can hold our heads high as a Nation, and should have no reason to fear the future - the early career researchers here today are living proof of that. Congratulations to everyone here today in continuing to aspire, and reach, those exceptionally high standards.

Of the highest importance is the ability of science to have access to parliament and parliamentarians and vice versa. This event facilities that and profoundly impacts the views and opinions of early career researchers. We must remain vigilant to ensure events such as this, and access by the public to these excellent facilities, continues without barriers or restrictions.

Congratulations again on an excellent day. Long may STEM for Britain continue. And, in this time when British stoicism is needed more than ever, may I use the quotation - Keep Calm and Carry On.”

Search #STEM4BRIT on Twitter to view the proceedings and visit Flickr to view all the photos from the event (including a selection below).