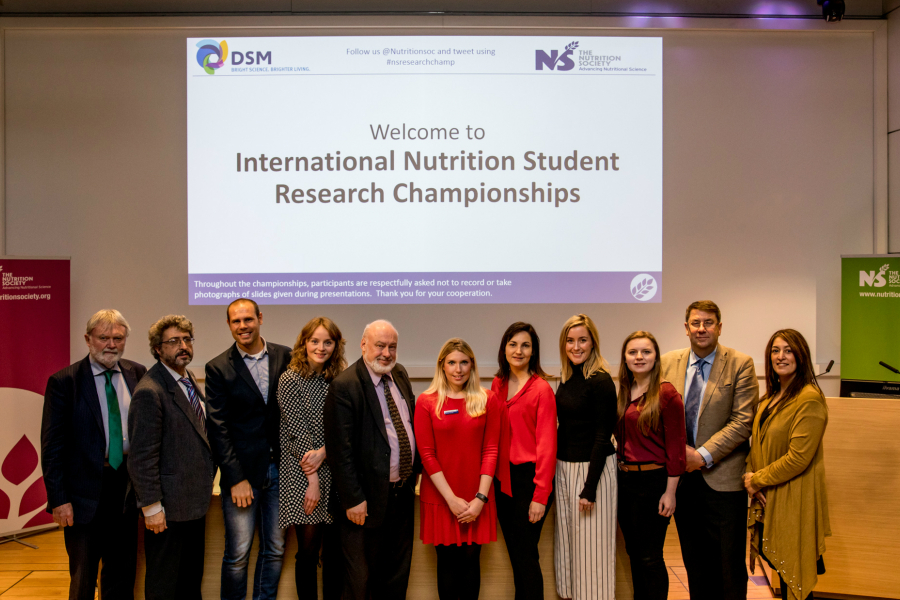 The Nutrition Society is committed to working together with other Nutrition Societies to strengthen nutritional science. As part of this commitment, the Society hosted the 2nd International Nutrition Student Research Championships, supported by DSM Nutritional Products, on 4 December 2017. The Championships are an international initiative which allow selected nutrition students from different parts of the world to collaborate and compete in a supportive atmosphere.

Professor Philip Calder, President of The Nutrition Society, welcomed over 50 delegates to the Championships emphasising the importance of international collaboration and the desire to expand the Championship of the coming years.

Dr Aoife Hayes, University College Cork, Ireland, gave the first presentation representing the Irish Section of The Nutrition Society.  She talked on the current evidence for the health benefits of vitamin K, highlighting that 55% of the population are not reaching Adequate Intake levels.  Dr Hayes went on to discuss fortification strategies including biofortification of chicken eggs using lessons learnt from work in vitamin d.

Dr Lukas Schwingshackl, German Institute of Human Nutrition, was selected as the German Nutrition Society candidate and gave a talk entitled ‘Generating the evidence for risk reduction - a contribution to the future of Food based dietary guidelines’.  Dr Schwingshackl began by outlining the global burden of disease before discussing his work looking at dietary patterns and disease risk.

Belgian Nutrition Society candidate, Nele Steenackers, University of Leuven, Belgium, gave a talk on nutrition deficiency after bariatric surgery due to the gastrointestinal changes in the physiology after surgery.  Her talk focused on impaired iron absorption in obese patients after Roux-en-Y Gastric Bypass.

The judges convened after the talks to compare scores and select a winner.  Professor Calder announced Nele Steenackers as the Championship winner during the Society’s annual reception, which followed the Championships.

"Introduced to the field of nutrition using the textbooks provided by the Nutrition Society, I felt privileged and honored to attend the second International Nutrition Student Research Championship. Competing against experienced nutritional researchers was definitely a unique opportunity to start my career in nutritional science and has contributed substantially to my personal development and my network and scientific capacities"  commented Nele Steenackers on winning the Championships.