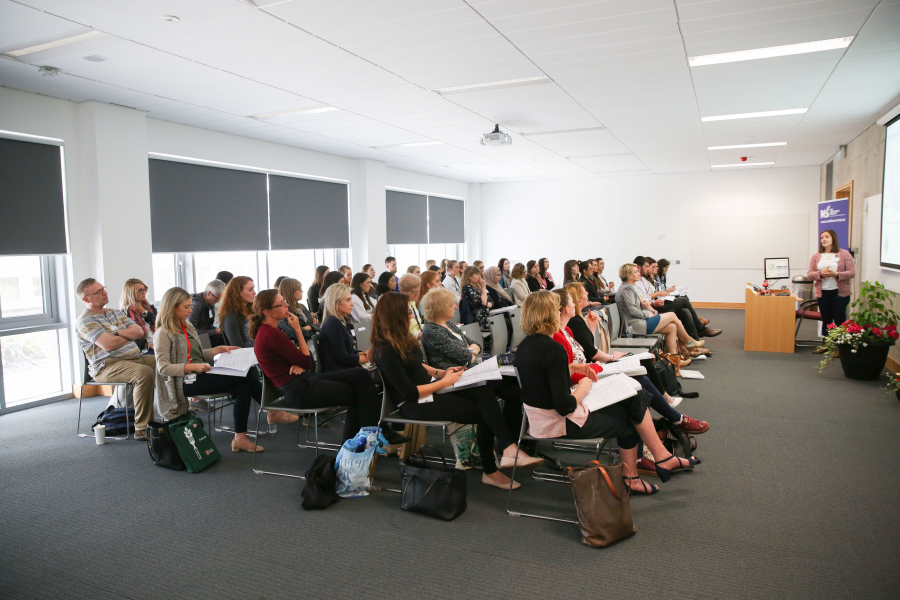 An important part of the Nutrition Society’s Irish Section conference is the Original Communication (OC) sessions where students and researchers showcase their emerging research through oral and poster presentations.  This year’s conference was no exception.  There were 70 OC’s presented across eight busy sessions covering a range of nutritional science topics.

Opening the sessions was a presentation on the novel research of the fatty acid desaturase (FADS) genotype and its influence on n-3 PUFA status after oily fish consumption highlighting differing biological responses to food components.  Following this, a talk on the lack of maximum safe limits for many vitamins and minerals across Europe, suggesting that in some cases, ‘less is more’, as supplementation may cause adverse effects. A third-year undergraduate student gave evidence on how serum 25OHD concentrations are primarily influenced through lifestyle habits and less through food intake itself in children under 5 years old.  Finishing the session were two talks focusing on the effect of B vitamins, in particular Riboflavin, on endothelial function and the variability of the effect in differing MTHFR genotypes.

After a short break for refreshments, the next OC sessions commenced with a comprehensive overview of the essentiality of vitamin B adequacy for neuropsychiatric performance and how supplementation may improve cognition through effects on one carbon metabolism. A further talk on the B vitamins explained the controversies behind high folate status concealing vitamin B12 deficiency. The talk showed evidence which suggests that a high folate status may not result in neurological disorders associated with ‘the folate trap’ - an issue which can occur due to lack vitamin B12, which reduces the amount of substrate needed to catalyse methyltetrahydofolate to tetrahydrofolate, causing a build-up of folate -  and increases in folate may actually support the maintenance of cognitive function in the ageing population.

Day two of the conference began with the Postgraduate Competition. Haya Al Khatib, King’s College London, gave a comprehensive talk - ‘Sleep: A novel target to improve disease’ - and highlighted that extending sleep may be viable strategy in the reduction of caloric and free sugar intake. Aofie Caffrey, Ulster University, explained the potential benefits of maternal folate intake and the epigenetic mechanisms which prevent the development of neonatal neurological and cognitive impairment. An important public health consideration due to differing folate recommendations globally, emphasising the need for further research in this area. Laura Kehoe, University College Cork, presented her work based on the nutritional status of older adults raising that most of this population exceed the recommended daily allowance (RDA) of fat and saturated fat intake, but do not meet the RDA for fibre. Nutrient intake may be insufficient in older adults therefore the underlying message was that nutritional status should be modified through diet to prevent deficiency. Last to present was Yvonne Lenighan, University College Dublin, who focused on the substitution of saturated fat for polyunsaturated fat as a public health strategy. Preliminary research highlighted that grass-fed beef contains less saturated fatty acid and more alpha-linolenic acid, which may increase serum omega 3’s and have anti-inflammatory benefits. However, research has shown despite the presence of these nutrients, grass fed meat seems to stimulate increased inflammation in adipose tissue – a surprising discovery. Postgraduate Competition lectures were brought to a close by Professor Alison Gallagher and Professor Jayne Woodside who congratulated and thanked those who took part.

The final OC session covered a vast range of research. Beginning the afternoons proceedings was a talk outlining the potential therapeutic uses of boarfish on postprandial glycaemic control and satiety, although early findings had no effect on biomarkers, potentially due to dose.  A novel presentation investigating oral health and diet quality indicated that declining oral health, and wearing dentures, decreases fruit and vegetable intake in elderly men in Northern Ireland. An interesting research project was presented providing evidence for altered metabolic rate following gastric bypass surgery in relation to body composition and weight reduction.  All the abstracts will be published in Proceedings of the Nutrition Society shortly.