Archives Interactive: International Women’s Day at The School of Food Science and Nutrition, University of Leeds | The Nutrition Society Skip to main content

Archives Interactive: International Women’s Day at The School of Food Science and Nutrition, University of Leeds 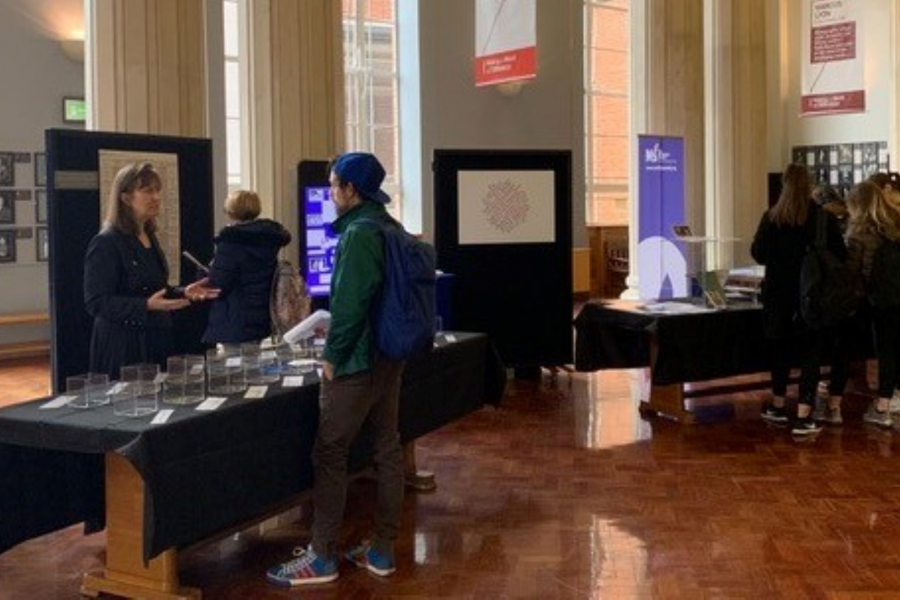 Inspired by an article in the Gazette, students from the School of Food Science and Nutrition at the University of Leeds, were instrumental in the creation of the first theme curated archive exhibition and the foundation of Archive Interactive, piloted at the 2018 Summer Conference (find out more). Building on the success of previous exhibitions, Archives Interactive was showcased again at the University of Leeds with the theme of women in science to mark International Women’s Day.

Dame Harriette Chick (1875-1977) would have been proud of the celebrations for International Women’s Day. The enthusiastic response to The Nutrition Society’s CEO, Mark Hollingsworth’s morning lecture on nutrition as a career, signposted the beneficence of Dame Harriette’s actions that one hundred and ten years later continue to help both men and women in STEM education.

Harriette Chick was the first female staff appointment at the Lister Institute in 1903 and in 1909 she became Honorary Secretary of the Women’s Social and Political Union. Her letter, co-authored with Louisa Garrett Anderson, addressed the fact that there was no female representative of the University Constituency at her Alumna. The objective of ‘The University Franchise’ was to rally graduates of the University of London to:

‘take their part in the removal of the artificial barriers still maintained against the full development of women’s faculties, and against the constitutional expression of their convictions’ Harriette Chick, The Morning Post, 16 November 1909 (The British Newspaper Archive, The British Library)

A copy of this letter formed part of the Archive Interactive exhibition prepared for students at the impressive Parkinson Court.

As students pored over records curated for Nutritional Physiologist, Dr Isabella Leitch (1890-1980) they learnt about her founding membership of the Society's Scottish Section and work at the Rowett Institute, Aberdeen, in 1942. Her standards in scientific quality of research reviews in Nutrition Abstracts and Reviews contributed significantly to the dissemination of trustworthy evidence-based research.

Moving between sections of the exhibition, students commented on finding the papers of Dr Eleanor Margaret Hume (1887-1968) ‘impressive and inspiring’. Dr Hume worked alongside Harriette Chick at the Lister Institute in 1918, examining the distribution of the antiscorbutic factor in food available for the armed forces. Female representation at the Lister had extended by 1940 to include Dr Alice Copping. Together, the three women studied the nutritional composition of wheat. Dr Hume became a member of the Nutrition Society Editorial Board in 1951 for the British Journal of Nutrition.

The trio of women featured in this exhibition were exemplars of the key concepts outlined in both Mark’s morning and afternoon lecture, on Women in Leadership. By combining their work in science with an active role in the Nutrition Society, they experienced debate, negotiation, administration, and resource management, and demonstrated that ‘there is no difference in the basic skills needed by a woman or a man to succeed in leadership’.

Students engaging with the archive material put into practice some of the concepts introduced to them in the morning on soft power and networking. While collaborating in groups seeking answers to the Archive Quiz and debating around the statements table, where students responded to archival statements relating to energy balance, they attractedthe interest of passers-by, including law and sport science students. Congratulations to Alana Clary who won the first prize on the Archive Quiz and will be attending Nutrition Futures conference in September. The second prize went to Maria Grabowskawho won a free place on a Nutrition Society Training Academy webinar of her choice. And, Lynsey Scott was delighted to receive the third prize of a Suffraduck.

Together, students and staff contributed twenty-five new names to the Cloud of Influence (first introduced at the 2018 Winter Conference archive exhibit), creating a Leeds tribute to the mentors, supervisors, and people of influence who have inspired them in their learning and encouraged them in pursuing career goals.

On the day, 84% of visitors to Archives Interactive said that they had never visited an archive before, and 84% also said that following the event they were now likely to look further into the history of nutrition. Curating themed exhibitions is one part of a rhizomic outreach and engagement programme to increase visibility of the records and counter current restrictions to onsite and online access.  Donors and users of archives are central to the Society’s Archive Development Plan, one that aims to inspire the nutritional science community, encourage future access to the Society’s resources, and ensure that the Archives thrive.