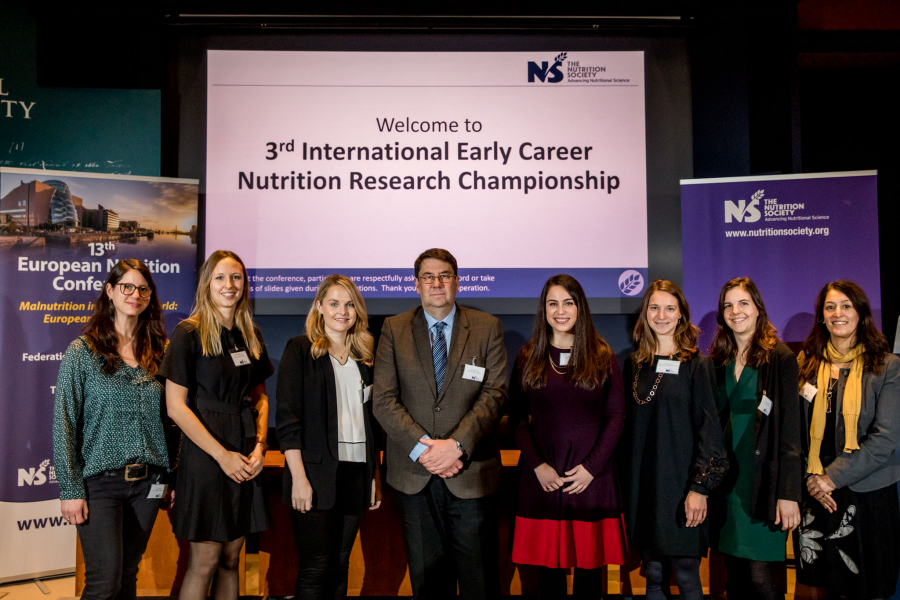 Working together with the international nutrition community is an essential part of strengthening nutritional science, and fundamental for advancing the study and dissemination of nutritional research.

The Society was therefore delighted to host the 3rd International Early Career Research Championship on 3 December at the Royal Society in London. Launched in 2016 by the Nutrition Society in collaboration with the French, German, Dutch and Belgium nutrition societies, the competition provides early career nutrition scientists with the opportunity to meet and compete with peers from around the world.

Six early career researchers from across Europe (Republic of Ireland, UK, Germany, the Netherlands, France and Belgium) presented their data to a room of nutritionists and academics. With 20 minutes to present their research, and five minutes to answer questions, researchers were judged on the quality of both their research and their presentation skills by an international panel consisting of Professor Philip Calder, Professor Eric Rimm, Professor Basma Ellahi, Professor Sean Strain and Professor Frank Thies.

The first candidate, Dr Louise Daly (3rd from left), from University College Cork, Ireland, presented her research on ‘Malnutrition, cachexia and sarcopenia; impact on tolerance to systemic cancer therapy, quality of life and survival.’  Nutritional deterioration is often an accepted part of cancer pathogenesis and treatment, with as little as 6% weight loss associated with poorer survival outcomes. Dr Daly’s study found that 42% of cancer patients in Ireland  had cancer cachexia with prevalence across all cancer types. Dr Daly stressed the importance of considering body composition rather than body mass when calculating chemotherapy dosage, given that many drugs are distributed in lean body mass. Dr Daly finished by emphasising that nutritional issues should be taken into account from the start of cancer treatment, and continually assessed throughout treatment to reduce the health and economic burdens of cachexia, with multimodal interventions appearing to hold the most promise.

Dr Eirini Dimidi (4th from right), King’s College London, looked at the use and effectiveness of probiotics in individuals with chronic constipation. With 14% of the general population suffering from chronic constipation, and just 47% of sufferers satisfied with their current treatment, there is a need to investigate new approaches. Dr Dimidi’s research into ‘Probiotics in chronic constipation: patients’ use and impact on symptoms, gut physiology and microbiology’, found that while 64% of the public believed the effectiveness of probiotics had been scientifically proven, just 30% of general practitioners recommended them to patients. Following this cross-sectional study, Dr Dimidi investigated the effect of probiotics on constipation, before running a double-blind randomised control trial (RCT) to investigate the efficacy of the B. lactis probiotic strain. While the RCT showed no significant effect on any of the outcomes assessed, Dr Dimidi’s research highlighted the importance of considering different strains when using probiotics for treatment.

The fourth candidate, Judith Neter (1st on the left), Vrije Universiteit, Amsterdam, is a final year PhD student with research funding grants already totalling €630,000. Judith presented findings on ‘Strategies to improve diet quality of Dutch food bank recipients, a vulnerable population subgroup’, investigating how best to ameliorate food insecurity and poor diet quality among food parcel recipients. The Dutch Food Bank charity currently supports around 132,000 individuals weekly, and with 3.7 million food bank users in the UK, Judith noted that this is a European-wide issue. Judith’s study found that 73% of those using Dutch food banks are classed as food insecure, with most failing to meet dietary recommendations for fruit, vegetables and fish, while exceeding those for energy and saturated fat. The intervention study tested four different types of food parcel, and found that adding fruit and vegetables, and replacing sweet and salty snacks with starchy staples such as rice, can improve diet quality in this vulnerable population subgroup. Ensuring the nutritional adequacy of food bank parcels is therefore an important consideration for donors and policy-makers, although there remains a need to assess European food insecurity at a national level.

Dr Marion Rincel (2nd from right), Institut Pasteur, Paris, followed, with her presentation on ‘Early life stress: from gut to brain.’ Dr Rincel’s research examined the role of the gut-brain axis in emotional vulnerability. She presented novel research findings suggesting intestinal permeability may play a causative role in the regulation of brain function. Given the expense and time-consuming nature of studying the long-term implications of early life stress, Dr Rincel’s research group used animal models to examine their hypotheses. Their research first showed that a perinatal high fat diet had a protective effect on stress-induced alterations of brain and behaviour caused by maternal separation. Following these findings, Dr Rincel investigated whether hyperpermeability in the gut among non-stressed rats, would cause depressive symptoms similar to those seen in rats submitted to maternal separation. Their results showed that gut hyperpermeability did indeed result in similar phenotypes to those displayed in the maternally separated rats, with sex-specific changes even observed in the mRNA expression of certain immune and stress-related genes in the medical pre-frontal cortex and hippocampus.

Giving the final talk of the Championship, Jolien Vandenbroele (2nd from left), Ghent University, Belgium presented her research entitled ‘Shrinking and swapping: nudging consumers towards less meat consumption.’ A third year PhD student, Jolien used her background in business economics and marketing communications to investigate whether consumers can be nudged towards more sustainable food choices by changes to grocery store choice architecture. While most health promotion campaigns continue to rely on traditional information, nudging is a tactic that appeals to our non-rational thought processes, aiming to preserve consumer freedom of choice. During a one-month study in a large Belgium retailer, sales data showed that providing smaller portion sizes as part of a selection (in this case, sausages) resulted in a significant decrease in the total volume of meat sold. Changing how a meat substitute product was displayed within the store using pairwise presentation also altered the amount of units sold, resulting in an estimated 160% increase for sales of the vegetarian product. Jolien’s next objective is to examine the impact of store changes on repeat purchases.

Despite close competition, with the judges praising the high quality of the presentations, the winner of this year’s Championship was Dr Marion Rincel.  Dr Rincel collected her prize from Professor Philip Calder during the Annual Nutrition Society Drinks Reception that followed the Championships.  The Nutrition Society would like to thank DSM Nutritional Products for their financial support, the French, German, Belgian and Dutch Nutrition Societies for their participation, and the judging panel for their time and expertise.