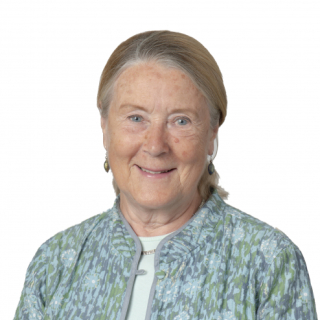 Professor Catherine Geissler was appointed Head of Department of Nutrition and Dietetics, King’s College London,  in 1990-5 and Professor of Nutrition and Head of the Division of Health Sciences in 1994., She was made Emerita Professor of Human Nutrition in 2005. Professor Geissler served as director of the Higher Education Academy Subject Centre for Health Sciences and Practice 2000-2011. Prior to appointment as lecturer at King's College (pre-merger Queen Elizabeth College) Professor Geissler graduated BDS in Dental Surgery in Edinburgh and MS & PhD Human Nutrition in Berkeley, California and worked in San Francisco, Teheran, and Paris. She has served on many professional committees including Ministry of Agriculture, Food and Fisheries (MAFF) Food Advisory Committee, World Cancer Research Fund grants committee, and British and American Nutrition Societies. Professor Geissler’s appointment as President of the British Nutrition Society came to an end in August 2016. She was elected Secretary General of IUNS (2013-2017; 20217-2022). Outside of academia, Professor Geissler is a consultant to the food industry and to international development agencies including the World Bank, CGIAR, FAO, which involved work in Iran, Haiti, Mauritius, Sierra Leone, Niger, Benin, Senegal, Ghana, Ethiopia, Yemen, Thailand, Philippines, Singapore, Indonesia, Malaysia and China.