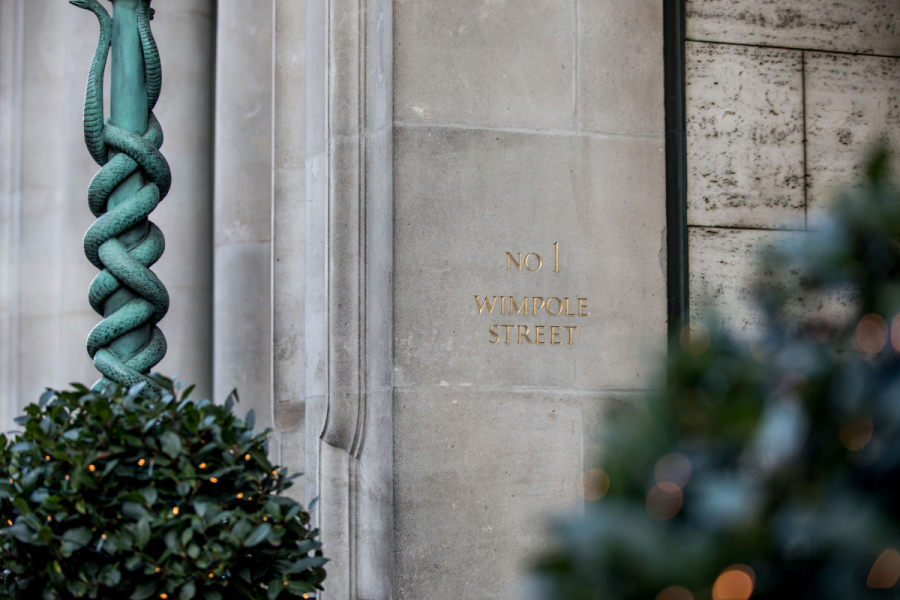 This year the Nutrition Society’s Winter Conference 2019 was held in collaboration with the British Association of Parenteral and Enteral Nutrition (BAPEN) and the British Society of Gastroenterology (BSG) on 2-4 December 2019. This was the first time the three organisations have collaborated on anything of this scale, with the topic of this year’s conference on ‘diet and digestive disease’ well suited to an audience consisting of nutritionists, dietitians, doctors and gastroenterologists. 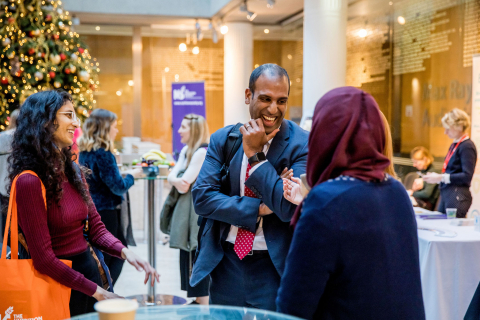 Thanks to all delegates for their engagement and thoughtful questions during the panel discussions and throughout the course of the conference, with many excellent tweets sent using #nswinter19 (a selection of which have been archived here).

The conference opened with a half day BAPEN Practitioners’ Session focussing on the practical and clinical application of nutrition care. Dr Emily Walters, University of Southampton, spoke eloquently on the sometimes divisive topic of oral nutrition support in the treatment and prevention of malnutrition. With 62% of dietetic approaches using a combined approach (oral nutrition supplements and dietary approaches), Dr Walters emphasised the importance of using a patient centric approach given the complex and multidimensional nature of malnutrition.

Dr Matthew Kurien, University of Sheffield, followed with a lecture entitled, ‘To PEG or not to PEG, that is the question’, where he focussed on the ethical issues implicated in parenteral nutrition. With the trajectory for recovery following PEG much lower among those with dementia or anorexia nervosa, Dr Kurien focussed on the importance of considering quality of life as well as quantity of life. Dr Alistair McKinley, University of Aberdeen, closed the session, with a thought-provoking lecture on treating anorexia nervosa. With a high genetic component in the aetiology of anorexia, Dr McKinley stressed the importance of not viewing the disease as a ‘lifestyle choice’. Rather, the disease drives subsequent behaviour and not vice a versa. With the malnourished brain becoming increasingly rigid in thought processes, refeeding is a critical part of ensuring adjunct psychological treatment is effective.

Tuesday began with the first plenary lecture of the conference on ‘Nutrition and gut health: the impact of specific dietary components – it’s not just five-a-day’, by Professor Jonathan Rhodes, University of Liverpool. Noting that we have barely scratched the surface when it comes to understanding the complex interactions between dietary components, the microbiota, and health, Professor Rhodes used the example of pectins and fructans to illustrate the different effect even some types of fibre have in the gut. 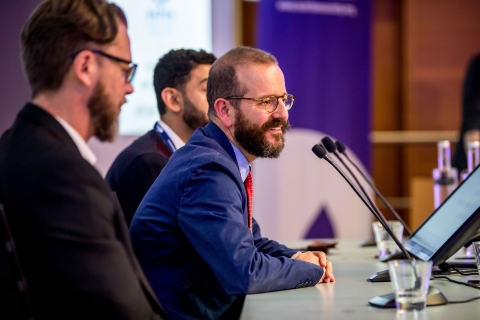 Next up was a symposium exploring nutrition, inflammation and pathobiology. Professor Kevin Whelan, King’s College London, delivered a fascinating lecture on the challenges and opportunities of the low FODMAP diet in treatment of IBS. Although the diet can improve overall symptoms of IBS, the impact of the low-fibre diet on the microbiota means that it is critical patients are supervised by dietitians when following the diet and do not spend too long in the restrictive stage of the diet.

Looking beyond FODMAPs, Dr Imran Aziz, University of Sheffield, looked at the role of gluten in exacerbating symptoms of IBS. Dr Bernard Corfe and Dr Liz Williams from the University of Sheffield followed, with a review of the evidence associating vitamin D with colon pathobiology. Although vitamin D deficiency appears to be highly prevalent in those suffering from IBS and IBD, it is not clear whether there is a causal relationship between digestive disorders and vitamin D deficiency. The symposium speakers agreed during the subsequent panel discussion that more understanding and focus from funders on the methodological complexities of running dietary interventions is required.

Six oral communication and 13 original poster sessions followed in the early afternoon. These covered topics as diverse as evaluating the use of a mobile app for FODMAP diets, to the dietary practices and beliefs of British South Asians with inflammatory bowel disease.

The last symposium of the day explored sensing and signalling of the gut environment. Professor Soraya Shirazi-Beechey, University of Liverpool, began with a lecture on nutrient and non-nutrient sensing and signalling in the gastrointestinal tract. With a single layer of epithelial cells separating the intestinal epithelium from the rest of the body, the intestine’s sensing capabilities are exquisitely sensitive – able to discriminate between over 1,000 different species of bacteria.  Dr Nicolas Lapaque, French National Institute for Agricultural Research (INRA), followed with an exploration of the functional and mechanistic actions of Short Chain Fatty Acids (SCFAs). Through a number of different functions, including immunomodulatory actions, SCFAs can impact host immunity which partially explains the effect of diet and gut microbiota on human health.

The final session of the day saw winner of the 2019 Cuthbertson Award winner announced - congratulations to Dr Aiofe Ryan, University College Cork, who delivered an outstanding Award Lecture. Dr Ryan’s lecture covered her research on the impact of musculoskeletal degradation in cancer and the strategies for managing associated wasting. With involuntary weight loss affecting 50-80% of patients with cancer, Dr Ryan highlighted the shortage of oncology dietitians in the UK and Ireland and the need to translate the scientific evidence into easily adopted dietary advice.

The morning began with a symposium exploring extreme BMIs, the regulation of intake and impairments of uptake. Professor John McLaughlin, University of Manchester, discussed appetite regulation in health and digestive disease. Although a complex signalling system exists between nutrient sensing receptors on gut endocrine cells and the brain, Professor McLaughlin suggested that the hedonic drive to eat may actually be stronger than the short-lived effect of gut hormones.  Dr Chris Pring, University of Surrey, followed with a lecture examining bariatric surgery. With 24,000 preventable deaths a year in the UK attributed to diabetes type 2, Dr Pring recommended wider use of bariatric surgery as a clinically and economically effective intervention, with hormone changes in the GI tract likely one mechanism for explaining its effect.

Professor Palle Bekker Jeppesen, University of Copenhagen, finished the symposium with an examination of intestinal insufficiency in patients with short bowel syndrome. Malassimilation is caused by both a decrease of the GI tract’s surface area and by changes in neuro-endocrine interactions. Use of distal hormones in the lower GI tract to counteract these changes show promise, with a trial of teduglutide showing significant improvement among patients. 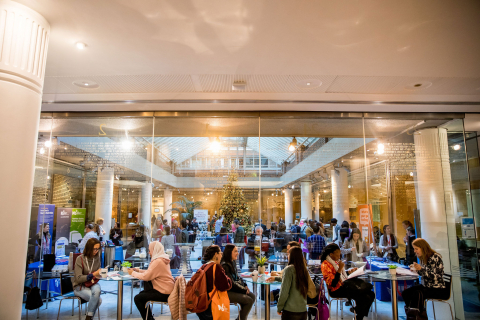 A further six oral communication sessions and 12 poster presentation were presented on a wide variety of topics, including exploration of hidden hunger in Camden, and a study examining the predictors of adherence to a gluten-free diet in coeliac disease.

The final symposium of the conference focussed on GI Cancers and the role of nutrition in prevention, pathology and management. Professor Mark Hull, University of Leeds, started with a look at colorectal cancer (CRC). With an estimated 54% of cases preventable, there is good evidence to suggest that diet, lifestyle and nutraceutical interventions (for example omega-3 and calcium supplements) can decrease the risk of CRC, although to date it has proved hard to translate the evidence into tangible public health impact. Dr Clare Shaw, The Royal Marsden, followed with a talk highlighting the importance of nutritional treatment along the entire pathway of cancer treatment. Weight loss is often a primary symptom of GI cancers with some 22% of patients severely malnourished at diagnosis. Preventing cancer cachexia and supporting good diet during and after treatment therefore has an important impact on survival outcomes.  Professor Ramesh Arasaradnam, University of Warwick, finished with an overview of the potential for metabolomic diagnostics in cancer, suggesting that volatile compounds found in breath and urine may offer a potentially cost-effective and non-invasive tool for cancer diagnosis.

Professor Christine Edwards, University of Glasgow, delivered the closing Plenary Lecture with an engaging talk entitled ‘Feeding the gut, nourishing the body’. Memorably describing dietary fibre as ‘food with its clothes on’, Professor Edwards emphasised that what we eat is not the same as what we absorb. The food matrix plays a critical role in the digestion and absorption of food, affecting a range of processes from speed of transit through the gut to the release of certain bioactive molecules. With the gut microbiome linked to a number of different health outcomes, diet and infant colonisation of the gut microbiota are important for promoting health.

Papers exploring the topics covered will be available in Proceedings of the Nutrition Society over the coming months.

View photos from the day