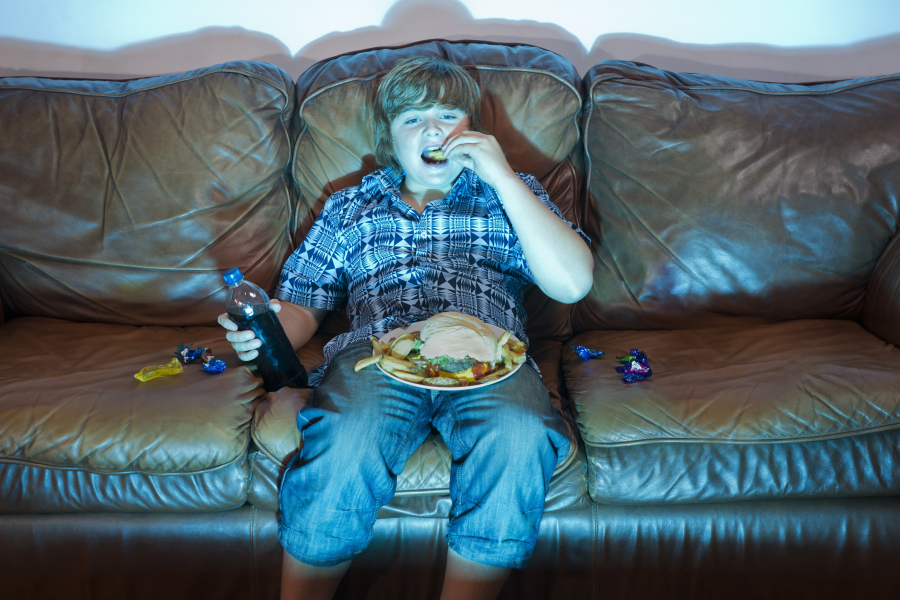 This month’s featured paper is from the Journal of Nutritional Science and is entitled ‘Television viewing and food intake during television viewing in normal-weight, overweight and obese 9- to 11-year-old Canadian children: a cross-sectional analysis’.  The authors consider the impact that watching television can have on childhood obesity.

It’s well known that obesity in children is one of the foremost public health problems that we face today. There is compelling evidence to suggest that one of the causes of this epidemic is excess screen-based sedentary time (i.e. TV viewing). In fact, we’ve known about the link between TV viewing and obesity in children for 30 years now, and there are several competing explanations for this link. Watching TV tends to increase the amount of food that people eat, and more time spent sitting means less time spent doing physical activity. There is evidence to support both of these effects in children, and it’s not enough to know that TV viewing leads to obesity, but rather we need to understand why it does if we hope to intervene and slow the obesity epidemic. We sought to compare the dietary habits during TV viewing of children who were considered to have normal weight, overweight, or obesity, and hypothesized that consumption of unhealthy foods during TV viewing would be associated with having obesity.

We examined data from a cross-sectional sample of 550 ten-year-old Canadian children from the ISCOLE study. Consistent with much of the published literature, we showed that children with overweight or obesity watched more TV per day than those with normal weight. In fact, children who watched more than 4 hours of TV per day (as compared to the recommended amount of less than 2 hours per day), had greater odds of having obesity. However, this effect was no longer observed once we adjusted for the amount of objectively-measured, high-intensity physical activity that children attained. Further, children with obesity consumed fast food and fruits and vegetables more frequently while watching TV, as compared to children with overweight or normal weight. More frequent food consumption during TV viewing has the potential to negatively impact energy balance in children.

This paper adds to the evidence which suggests that excess screen-based sedentary time, such as TV viewing, is one of the causes of the childhood obesity epidemic and shows that both diet and physical activity play a role in this association. In recent years, several countries have issued recommendations to limit children’s sedentary time, especially screen-based sedentary time. In the years to come it will be important to implement, and continue to support, monitoring strategies at the population-level using consistent definitions of sedentary time in order to quantify the global effect of this deleterious health behaviour.