Behind the scenes of an Organising Committee

The trio of documents featured in this blog follow a paper trail to evidence skillful communication sensitively and pragmatically handled by organizing committees. These documents relate to the Second European Nutrition Conference, Munich, 1976.

At the time of writing this letter, Professor of Internal Medicine and Director of the Medical Polyclinic of the Ludwig-Maximilians-University of Munich, Nepomuk Zöllner, was President Elect of the Second European Nutrition Conference. His correspondent, Senior Lecturer in Metabolism Department of Medicine, Middlesex Hospital Medical School, Professor Gaston Lennox Pawan, was Honorary Secretary of the Nutrition Society. Dr Elsie Widdowson had in 1973 become a member of the Editorial Board of the British Journal of Nutrition and was well placed to represent the Society at the March meeting with Professor Zöllner. 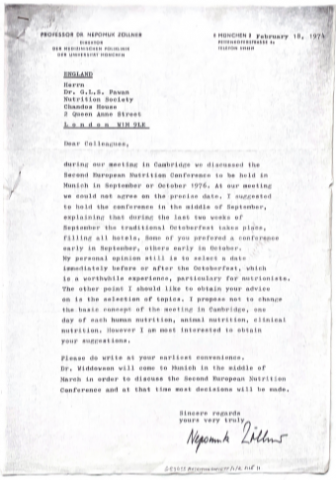 With a simple but significant asterix against their names, three members of the Organizing Committee of the German Nutrition Society were registered as attendees at the Programmes Committee meeting on 14 March 1975. Attending with Professor Zöllner, Chairman of the Organizing Committee, were Dr A. Janβen, responsible for organization, and Dr H Dorfler, responsible for accommodation. 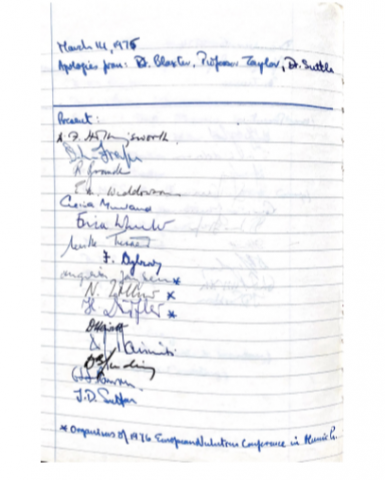 As an archive record the Second Invitation for Papers is a good example of finding aesthetic value in the materiality of a document. The asymmetric Swiss modernist style of the Helvetica 75 bold sans serif neutral typeface is redolent of the dense, solid appearance of realist design that in its form has no intrinsic meaning. That it was chosen by the Organizing Committee of the German Nutrition Society is a powerful expression of their intention to capture the attention of the European Scientific Community, and with vivid red print disrupt it into action. 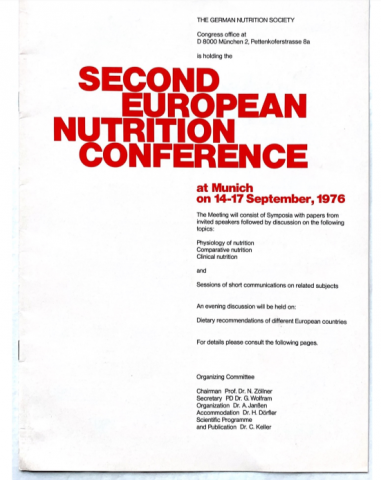 This blog was written by Sheila Mercieca in collaboration with Dr Carrie Ruxton.