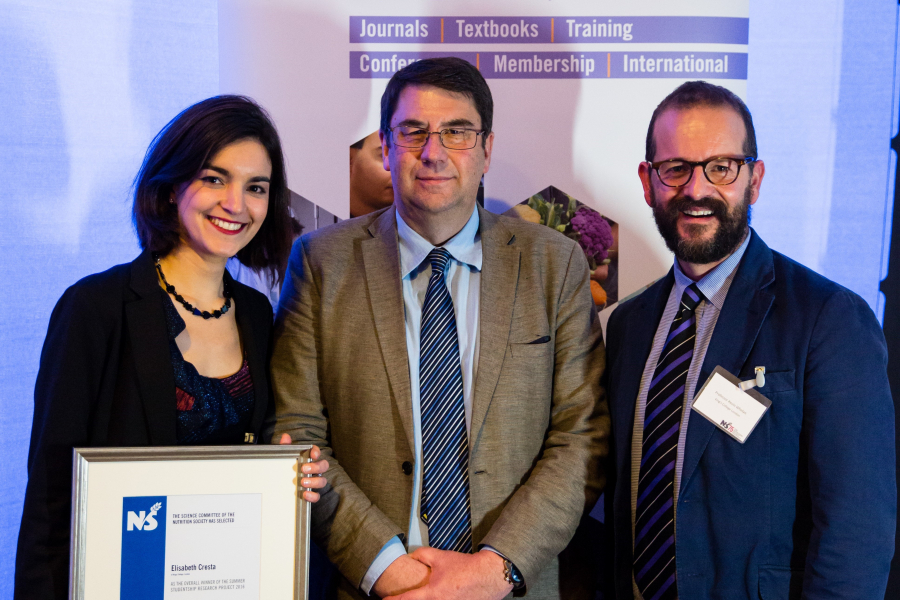 The 2016 Summer Studentship programme proved very popular with students, and over 30 applications were received from a range of universities, both in the UK and overseas.  The judging panel had a hard job in deciding the final eight, but they awarded the studentships to:

The students organised their own projects and with local supervision completed their research within the eight weeks.  The final stage of the studentship was to write a report exemplifying their findings.  As a pilot in 2016, it was decided to choose the winner of the best research project overall, from the eight studentship project participants. Elisabeth Cresta was awarded this prize at our 75th anniversary drinks reception, ahead of the Winter Conference in December 2016.

“Being awarded the Nutrition Society Summer Studentship in April 2016 was a great accomplishment and I felt very privileged to have had the chance to be part of Professor Kevin Whelan’s team at the Nutrition and Dietetics Department at King’s College London. The studentship taught me a lot about how to conduct research and I learned a lot about a topic that is of great interest to me. Working alongside such a hardworking team was invaluable and also being able to present the outcomes of my project in September at the European Network of Dietetic Students International Congress in Granada was a great opportunity for me to improve my presentation skills and test my abilities. Finally, attending the 75th Nutrition Society Award Ceremony and being awarded the Overall Winner of the Nutrition Society Summer Studentship was a great honour”  said Elisabeth Cresta, Kings College London (project title: Additive Emulsifiers and Inflammatory Bowel Disease)

Congratulations to Elisabeth Cresta for being the overal winner of the Nutrition Society 2016 Summer Studentships Research Programme.