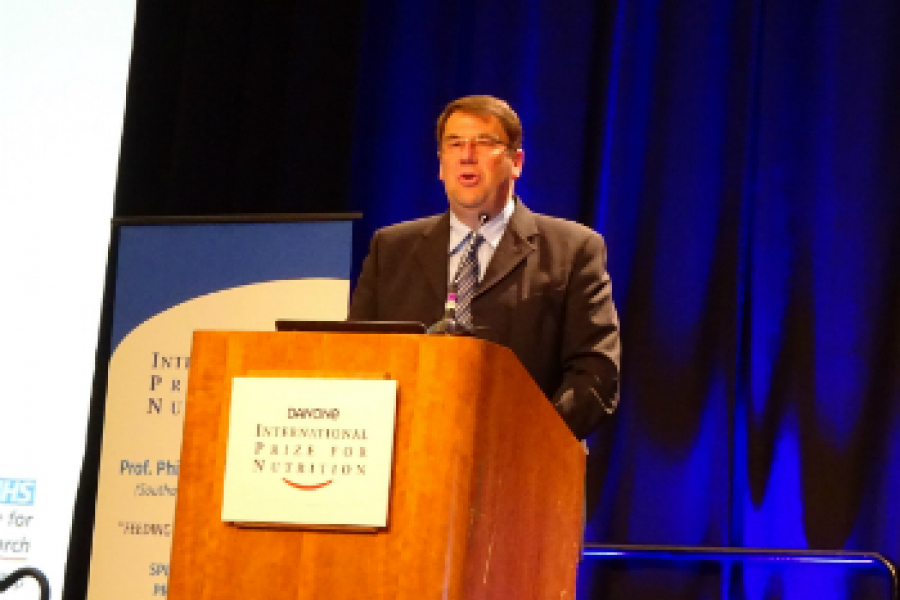 Nutrition Society President Elect, Professor Philip Calder, has been awarded the 10th Danone International Prize for Nutrition in honour of his ‘pioneering work in nutrition and immunity over the last 25 years, his ground breaking results and their far reaching clinical applicability’.  With previous winners including Professor David Barker for his thrifty phenotype hypothesis, Professor Jeffrey Friedman for the discovery of leptin and Professor Vernon Young for his research on protein and amino acids metabolism, Professor Calder is amongst a prestigious list.

In his award lecture at Experimental Biology 2016, Professor Calder took the audience through the journey of his work.  Firstly describing the function of the immune system, how the immune system changes throughout the life cycle and the potential consequences when the immune system breaks down.  He then went on to discuss the role of nutrition in immunity and inflammation, in particular, fatty acids and how they play a role in rebalancing the immune system.

Professor Calder previewed the results of his latest research into the role of omega-3 fatty acids and immune-related conditions, which is awaiting publication.  The ‘Salmon in Pregnancy Study’ supplemented pregnant women’s diets with salmon (a source of omega-3 fatty acids) twice per week from 19 weeks of pregnancy until birth.  Results showed no difference in immune response at six months, but allergy tests at two to three years of age found that children of salmon consumers appeared to have improved immune function and were less likely to have asthma compared to the control.

Professor Calder was particularly celebrated for the translational aspects of his work.  He has extended the results of his research to human health and his work with healthy populations has influenced the development of nutritional guidelines.  His clinical work with patients has led to innovative treatments with omega-3 fatty acids supplementation which has shown a reduction in repeat events and reduced hospital stays in patients after cardiovascular events.

The lecture closed with personal acknowledgments to those who inspired Professor Calder in 1987 when his research career was beginning and to those who continue to support his work and motivate him nearly 30 years later.