The official opening of Boyd Orr House, and celebration of the Society's 80th Anniversary | The Nutrition Society Skip to main content

The official opening of Boyd Orr House, and celebration of the Society's 80th Anniversary 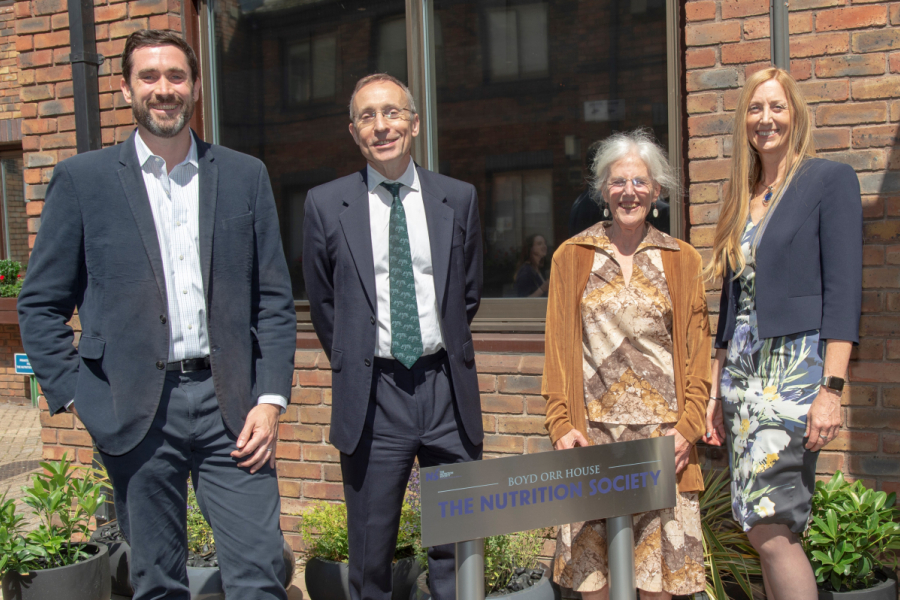 In celebration of the Society's 80th Anniversary, The Nutrition Society's headquarters was formally opened on 23 July 2021 by the Society's President, Professor Julie Lovegrove.

Good morning, and on behalf of my fellow trustees a big welcome to you all. Thank you for joining us for this special event - the official naming of The Nutrition Society’s refurbished offices. As many of you will know this event was originally scheduled for May last year, then postponed until October and then further delayed until today - I am very pleased to see so many of you joining us in what are still somewhat uncertain times as we emerge from the pandemic.

The good news is the delay in this event has meant we have been able to schedule it for today - 23 July, the exact date 80 years ago The Nutrition Society was officially founded.

Back in those early days of World War II, discussions had been underway for some time about the possible formation of a scientific learned society for nutrition. A government Advisory Committee on Nutrition had been set up in 1935, together with a Market Supply Committee. The relation of poverty and poor food to health was emphasised by Sir John Boyd Orr (more of him later) in his 1936 publication 'Food, health and income', and as war progressed it was recognised that the nutritional status of the nation was of immediate concern. Communication between officials and scientists became crucial, as the schemes for wartime rationing of food and management of supplies were developed. All of this led, through a series of informal meetings, to the decision to form a nutrition society. Within the display cases inside this building you can see, and read, the exchange of letters in preparation for the formation of this learned Society, which make very interesting reading.

The first meeting of this new Society was held in London at the Royal Institution on 23 July 1941. A total of 28 people, representing different disciplines in nutrition, attended, with Sir John Boyd Orr as chair. I am proud to say that over the past 80 years the Society has grown from 28 members to over 3,000, who are located in 85 countries around the world, illustrating the impressive global reach of the Society today. The Society has developed healthy cash reserves, which is fortunate in these challenging times, which allows us to offer numerous activities to fulfil our mission to ‘advance the study of nutrition and its application to human and animal health’ an ambition which hasn’t changed for 80 years.

Examples of these include 4 annual international conferences, 2 postgraduate symposia organised and hosted by our student members in the UK and the island of Ireland. I would like to think the founding members would be proud of the enduring legacy the members of the past 80 years have nurtured for them.

Turning to this building, the Society purchased number 10 in 1990, after many years in small, cramped rented accommodation in central London. In 2008 number 11 became available and the Society purchased this as well. In 2009 basic renovations were undertaken to connect the two buildings. These renovations were the minimum required to make the two buildings functional as one, as the Trustees at the time believed it to be prudent to be able to quickly convert the buildings back into two should they need to liquidate one of these assets.

Fortunately, the Society continued to go from strength to strength and, after a survey of the two buildings in 2019 showed that 26% of the internal space was taken up with corridors and stairwells, the trustees approved a more radical renovation to formally merge the two buildings into one cohesive space.

We have created a state of the art video conferencing suite, a library and meeting room which contains all the Society’s journal publications over the past 80 years, a smaller meeting room on the top floor, enhanced and comfortable office space for the staff, and various breakout areas and showers and changing rooms (to support the staff who like to visit the local gym or run and cycle to work).

The four main rooms have been named after eminent nutritional scientists.

They are: Elsie Widdowson; Dame Harriette Chick; John Waterlow; and Robert McCance. These names were selected by our Honorary Fellows.

Finally, the building is today being named in honour of the Society’s first President, Sir John Boyd Orr, later Lord Boyd Orr. His full biography is on the wall on your right as you enter the building, as is his photograph. Lord Boyd Orr was born in 1880. Over his career he was a Scottish Teacher, a medical doctor, he won the Military Cross at the Battle of the Somme in 1916 and the Distinguished Service Order at Passchendaele in 1917. He was a biologist, nutritional physiologist, politician, businessman and farmer. If that wasn’t enough, he was awarded the Nobel Prize for his scientific research into nutrition in 1949, at the same time as he was elevated to the peerage as Baron Boyd-Orr. I was touched to hear that he donated all of the money from these awards to world peace and united world government, which demonstrates his generosity and dedication to these worthy causes.

As trustees, we could not think of a more fitting tribute to this great man than to honour him by naming the official residence and home of the Nutrition Society after him. We are delighted that Lord Boyd Orr’s granddaughter and great grandson are with us today (image above).

I will now ask our distinguished guest, our local MP for Hammersmith, Mr Andy Slaughter to perform the important job of unveiling the building sign (image below). Once Andy has done so, please feel free to enter the building and wander around. We have arranged a light lunch for you inside, and there are plenty more drinks to be had. Mark and his team are here as well to guide you around and answer any questions you may have. Before I hand you over to Andy, I would like to take this opportunity to thank you all again for coming today. I would also like to offer my sincere thanks to my exceptional fellow Trustees and Council Advisors and of course to our excellent CEO, Mark Hollingsworth, and all of the fantastic Nutrition Society staff for their continued support, hard work and insightful advice over the extremely challenging times during the pandemic. It has been a huge team effort and I am proud to say that this has ensured we have successfully delivered a very busy calendar of events over the past 18 months, including this special event today. 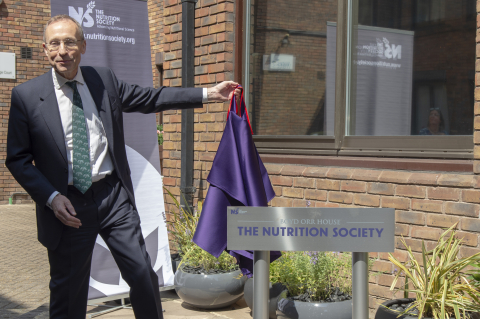 Further images taken at the event can be viewed on Flickr.  Photography credit: Marcos Bevilacqua Photography

View a short history of the Society and the Members