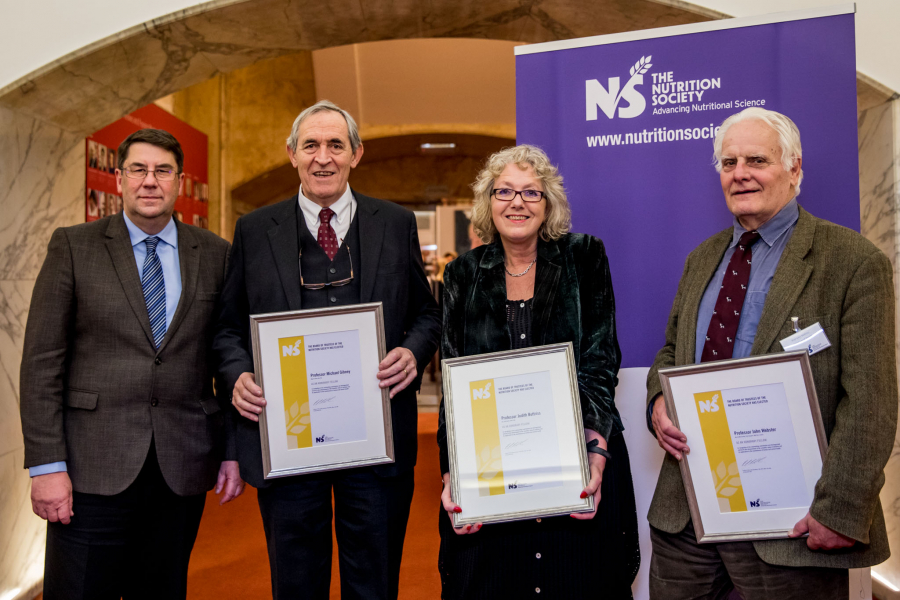 Honorary Fellowship of the Nutrition Society is awarded to distinguished individuals who have made an outstanding contribution to the Society, and for their long term committment to nutritional science.  The Society are pleased to announce three new Honorary Fellows of the Society, whom were each awarded by the Society's President, Professor Philip Calder:

Professor Judith Buttriss BSc DipDiet PhD RNutr FAfN has been Director General of the British Nutrition Foundation (BNF) since 2007.  Professor Buttriss studied Nutrition and Dietetics at the University of Surrey. She worked as a research dietitian in Professor John Waterlow’s obesity unit for about a year before returning to Surrey to study for a PhD concerning vitamin C and hepatic drug metabolism, which combined the disciplines of nutrition, biochemistry and toxicology.  With a doctorate, Professor Buttriss worked in various labs as a postdoc researcher, in particular on vitamin E and selenium at Guy’s Hospital Medical School.  In 1985, she decided to leave the lab environment and joined the National Dairy Council (NDC) as Senior Nutritionist, where she stayed until 1998 when she joined the BNF as Science Director.  Recently, Professor Buttriss was Senior Editor of the second edition of the Society's Public Health Nutrition textbook.

Professor John Webster MA VetMB PhD MRCVS graduated in veterinary in 1963 from the University of Cambridge, and is now Professor Emeritus at the University of Bristol.  Professor Webster’s focus has been on nutrition, veterinary teaching and research, including four years in Canada at the University of Alberta and 10 years at the Hannah and Rowett Research Institute in Scotland.  In 1977, he was appointed Professor of Animal Husbandry at the University of Bristol Veterinary School where he established a unit for the study of animal welfare and behaviour, one of the largest such group in the world, (over 60 strong). He is a Past-President of the Nutrition Society and Honorary Fellow of the Association for Nutrition. In 2012, Professor Webster published “Animal Husbandry Regained” exploring the impact of farming animals for food on human health, animal welfare and the living environment.